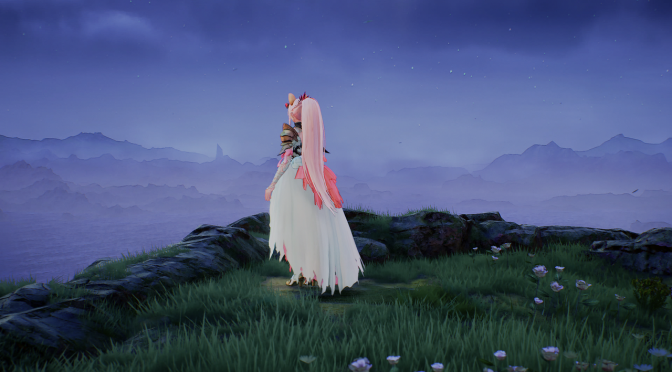 Note: This game has more typos and misspellings than it should, and I have included quite a few in this post. Some include characters you meet throughout the game, so those could be spoiler-ish. Also, the game allows you to customize the look of characters, hence why some have bunny ears, strange outfits, etc. They don’t normally look like that.

It’s been years since I’ve had as much fun with a role-playing game as I did with Tales of Arise. The game is not perfect, but it’s almost there.

This was my first experience with the Tales series, other than the anime adaptation of Tales of the Abyss. A friend of mine has recommended the series off and on over the years, but the desire to play it was never there.

The beginning hours of the story feels rather generic. Guy with amnesia meets angry girl who wants to topple some powerful rulers of the land who come from a different planet, Rena, and enslave the people of Dhana. But it does pick up, and it just keeps better and better and leads to things unexpected. When you get to the end and look back at the beginning, it feels almost like a completely different game.

The first thing I noticed in the game, as I imagine most people would, are the graphics. Running on Unreal engine, they are gorgeous. The character models, but especially the environments, are full of color and detailed. I only wish the camera could be adjusted to really take in some of the views. Or even a photo mode, as some games are adding these days, would be quite nice.

I played entirely on PlayStation 5 on an LG CX OLED TV, but from comparisons videos I saw online, even the base PS4 or Xbox One releases look great, though a few of the details are missing. Though if I had played on those, I would still praise the visuals.

Now that I’m mentioning other versions, let’s briefly discuss that. The game was launched simultaneously on Xbox One, Xbox Series, PlayStation 4, PlayStation 4 and PC (Steam). The differences I’ve seen videos of show a difference in visuals, frame rate and loading times. Visuals I discussed above. Frame rate is something that doesn’t bother me too much, as long as it’s not fluctuating all the time. I think I chose “Prioritize Graphics,” but “Prioritize Framerate” is an option available on PS5. I believe the base PS4 and Xbox One might not have those options, but I don’t have those, so I can’t confirm.

Loading time though is something that makes me extremely happy I wasn’t playing on an older system. This video demonstrates some of the difference.

I have to say, if I had the slower loading times shown, my enjoyment may have dipped a bit.

The PC version isn’t demonstrated, but a friend of mine has it and said he didn’t notice any long load times. Gotta take his word on that.

During your adventure in the game, you’ll come across people needing help and will send you on a variety of side quests. Some are fetch quests, some are to clear out some monsters (regular and bosses). They don’t have time limits and there isn’t a limit to the number you can have going at once. At least not that I noticed.

This leads into the map system. Most of the side quests will place markers on the map, but not all. However you can’t selectively hide or show particular ones, even if you choose to “give focus” to a particular one, as the game suggests. So if you have a lot going at once, like I did for a while.

There are two map systems in the game. One is a mini-map almost always present in the top right of the screen. The other is a full screen map you bring up with a button press on the controller. The mini-map will show enemies and items whereas the full screen map will allow for fast travel to select locations and shows side quest markers.

There’s no way to turn off the mini-map, and the button assignment (square on PlayStation) cannot be changed. I mention that because even after 55 hours with the game, I was still getting full screen map and the menu/inventory system (touch pad) confused. It would really be nice if more game developers and publishers allowed the player to set button assignments freely.

Speaking of inventory, you can adjust equipment, use items, upgrade your skills and abilities. Along with this you can set each character’s outfits, which are purely cosmetic. Ears, wings, hats, glasses and more can be adjusted. You’ll get more of these as you progress through the game.

Random encounters are not a thing in the game. Every encounter appears on the map, and depending on where it is, you can avoid some of them by running around them. This includes just about every special battle with some mini bosses. But any time you progress into a new area, or before you encounter one of those bosses, make sure to save. There are times your party could be severely under-leveled and you get one-hit.

Thankfully the game allows for saving anywhere and any time you’re not in a battle.

Combat itself is very interactive. Up to four party members can actively participate in a battle, though you can call in other party members for a quick attack if their battle gauge is full. Battle gauges recharge slowly over time for everyone, actively in battle or not.

You have a basic attack that can be used a limited number times in a row for a small combo, and special attacks, called “artes,” that use AG points that recharge when you stop attacking. And a few other systems get added in as well.

And you can control who your party members will attack, though sometimes they’ll ignore it and still choose to attack whoever they want. Or you can swap to any one of your four in-battle members on the fly, though I personally stuck with the main character the entire game. I didn’t see much reason to use anyone else.

It sounds complicated, but elements of battle are introduced slowly, not all at once where it feels overwhelming. But if that’s still too much, I believe you can set the AI to control all of the battle other than maybe a few battle gauge attacks.

New artes are learned by using abilities in battle, as well as unlocking them as you collect SP from each battle. Any character you actively control in battle can only have a limited number of attacks available to use, but the AI-controlled characters can use all of them.

The last thing I’ll say about combat is the speed. Again, on PS5 the loading times were almost non-existent, so it all felt very snappy. When I was higher level over some very low-level enemies, called zeugles, battles took but a few seconds. But for an on-level or higher battle, things started to feel a little slow. Not that I want a want a boss battle to be a 30-second encounter, but when you’re constantly using battle gauge attacks, each 3 – 5 seconds long, and people call out the same thing over and over, it does get a bit annoying. Thankfully they don’t approach the 80-second summon of Knights of the Round from Final Fantasy VII.

Earlier I mentioned briefly you can save anywhere and any time, which is true, and something I greatly appreciated. And staying at an inn to recover your HP and CP (magic) doesn’t cost a dime. Should you need to recover when not in a town, there are campsites scattered across the world that allow you to rest and on occasion view cutscenes where you’ll further develop relationships with party members by having conversations with them and learning more about them. None of these main characters feel shallow and all have their own reasons for going on the journey.

And each time you rest, be it at an inn or campsite, you have the option to cook food with collectables found in the overworld or purchased from a store. Each recipe you use grants a different effect for anywhere from 3 – 18 minutes (that I could tell) based on who in your party cooks the food. No, you don’t have to memorize recipes. Just select it from a menu.

But some of the effects are not clearly labeled. For example, many of these effect have different levels, each labeled with a cryptic letter. L, M, S or T. Unless I skipped something, I never found an explanation of which letter was weaker or stronger. And the first recipe I found was a T, so I’m guessing that’s the weakest?

Sound is the last thing to discuss. I played with a 2.1 speaker setup. The overworld music in the first area felt like it was trying too hard to go for that “epic” sound, and the basic random encounter music didn’t impress, but everywhere else the music was a perfect fit and fit the mood of each area. I played entirely with Japanese voice acting, so I can’t comment on how the English voices sound. Japanese though sounded like typical JRPG fair.

One of the things that immediately stood out to me, as evident from the screenshots shown in this review, is the lack of editing that went into the English localization script. Either someone didn’t think an editor was needed or the translation and localization was rushed and not given the time it needed. This is a major release from one of the largest game publishers in the world, and this shouldn’t’ be acceptable. From the intro video to the end of the game you’ll find these throughout the game.

During my time with the game I played with Japanese audio. But I read online the English dialog doesn’t match the subtitles, which seems really odd to me. https://www.reddit.com/r/tales/comments/pnonr8/anyone_else_noticing_a_lot_of_text_mistakes_typos/

Yes, I have my gripes with the game, as I do pretty much any other game I’ve played or probably will play, but the overall joy I had with the game vastly outweighs these collective faults. The story, the characters, the environments, combat, graphics, music. It all adds up to a near flawless experience.

If you’re a fan of RPGs, go out and buy this now. And if you’re not a fan or not sure, try the free demo. It’s available on PSN, Steam and Xbox.

At the beginning of this I wrote the desire to play a Tales game was never there for me. And that still holds true. Why? Because I don’t think I’ll come across an RPG that tops this experience for many years to come. I think it’s probably my favorite RPG I’ve played since Xenoblade on Wii. And I’ve played some good ones in that time, like Persona 5.