It meant I knew people, but I wasn’t close with a ton of people. Thanks to facebook though, regardless of my prior relationship with someone, I’ve been able to keep in touch with many. One of those people is Jim. END_OF_DOCUMENT_TOKEN_TO_BE_REPLACED 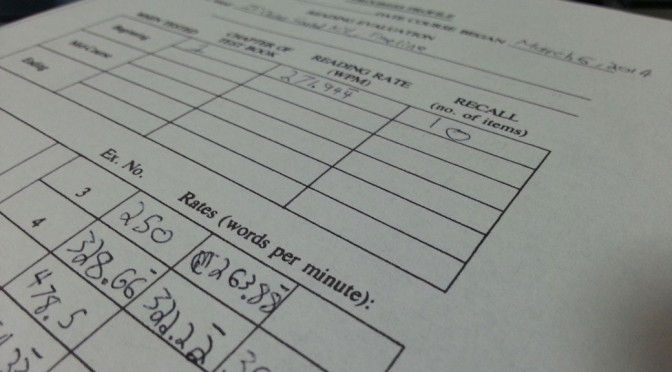 A few posts back, I mentioned a site I came across a month or two ago called Spreed! Using the site helped me to read faster when I use the site itself, but reading anything else was still my normal rate of around 300 words per minute.

Based on some other things I read recently, the site works because it cuts down on the time needed for your eyes to move and focus on new words. That is, the effect is really just temporary. I decided I’d find a different way to improve.

Reading reviews of different products and books, I found a book titled “Breakthrough Rapid Reading.” I threw down about $15  to get it from Amazon. The book is a course meant to be done in about 4 – 6 weeks.

The book starts with a test to get an estimation of your reading speed. I was around 250 wpm After a few days, I’m past 400 wpm. It seems that at the moment, the book is focusing first on increasing my speed, while later chapters will have me focus on improving my comprehension.

How fast I will get after the recommended 6-week time, I do not know. But I will say I’m enjoying it so far.

Here’s what my typical weekday consists of:

It’s really not THAT busy, I suppose, but it feels like it to me. As I’ve told people in the past, I’m treating school as my job. 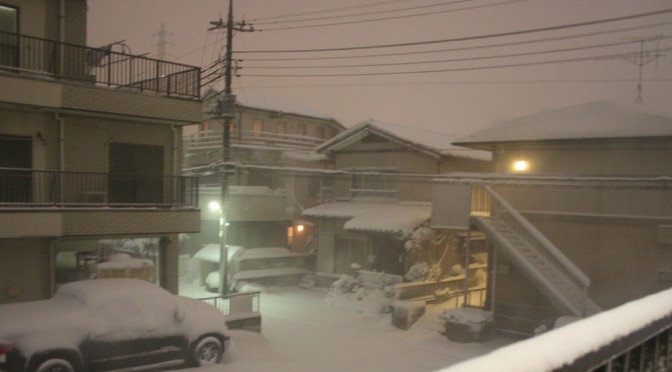 So when the weather forecast here predicted a day of snow on Saturday, Feb. 8, I wasn’t sure what to expect. Of course, it ended up being a record amount of snow. Close to 9 inches in a day. The most snow the greater Tokyo area has received in 13+ years. I was pretty excited to be here for it. ^_^ END_OF_DOCUMENT_TOKEN_TO_BE_REPLACED

Back on the Feb. 4 post, I mentioned that I was interviewed by my friend Junko, over at Circle 44 Production? Well, the interview is up!