So, shitty androgynous, emo bands have become all the rage recently. But where did they get their start? A few of my coworkers and I discovered the answer, and it’s none other than Chris Gaines, or should I say, Garth Brooks.

Now, you may not realize this, and it’s probably because it was a stupid thing to do, but Garth Books tried an unsuccessful pop career back during the height of his popularity. He even came up with a whole timeline and history for this pseudo persona. Did you know Chris Gaines was born in Australia to an Olympic swimmer coach?

Take a look at that mug of his.  It screams “Daddy don’t love me know more and he beat me in front of my girlfriend and he took her from me and now I have nowhere to go so I’ll sing about it!”  OK, maybe that pic doesn’t say it, but surely this second one does. 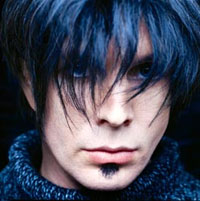 Looks at the pain in his eyes.  He takes it out on himself not by cutting, but by dressing like a tool and combing his hair over his face. Seriously, why do people think this looks good? And why do girls think it’s a good look?

Now, every decade has its share of shame.  However, I always hear people ragging on the ’80s and how it was so awful.  I beg to differ.  We had some wonderful movies, such as License to Drive, The Goonies, E.T., Transformers (not the shitty remake from Michael Bay).