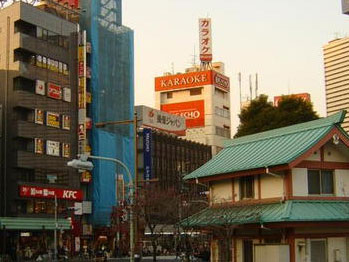 I can’t recall everything I did, nor the order in which I did them, so this will be a random hodge-podge of happenings.

The flight to Japan from Houston was a non-stop on a 777 via Continental Airlines. The flight was to be about 14 hours, but we ended up taking about 15.5 hours. We sat on the tarmac about 30 – 45 mins for some repairs to a seat for the flight attendants. The rest of the extra time was spent flying farther north to the North Polar than usual so that we could avoid some turbulence. And I only slept about an hour or two on the flight, despite my getting 3 – 4 hours of sleep the night before.

The plus side of the trip: the video-on-demand was quite nice. Sure, it was all 4:3, and not letterbox, but there was a good selection. Heading over I watched Get Smart, an episode of The Big Bang Theory, Back to the Future and the movie version of Densha Otoko.

So when I finally got to my friends’ apartment, it was about 7:30 p.m. Sunday. Tomo and I went out for a drink at a local izakaya. There I had some basashi, or raw horse. It was quite delish.

Stephanie and Tomo work Monday through Friday, so I had the days to myself to wander about. I would wake up between 10 a.m. – noon, and head out between 12 – 1 p.m.

Things I did included: shopping for games/CDs, clothing, eating lots of food, walking, people watching and riding the subways

Arcades are still prevalent in the Tokyo area, despite recent closures of some. I played Street Fighter IV, and I must say that prior to seeing it in person, I wasn’t thrilled with the new art direction. However, after playing the game, I’m convinced it must be seen in person to appreciate the new style.

Both men and women alike frequent the arcades. Games are varied still.  You have shooters (such as Gradius, Galaga, Thunderforce, games along those lines),  light-gun games (House of the Dead 4, Rambo), music/rhythm games (Pop’n Music, Ju-cube, Beatmania), UFO catchers/crane games, racing and platform beat-em-ups. It’s this variety that is why they still exist in Japan. And just about every single arcade I went to was $1 per play per game. Oh, and they all use real currency, not stupid tokens.

The last time I was at a US arcade, I had to use tokens or some card with a perplexing point card system. Games were probably $2 each, and everything was either fighting or light-gun. Shit like this is why people don’t go to them in the US.

My last night in Japan (Saturday night), we went to a karaoke bar. Let me tell you, the Japanese know how to do karaoke. The few times I’ve sang karaoke in the United States, there was a limited song selection (maybe 200 – 300 songs), and I had to compete with others to get in line to request a song.

In Japan, you rent rooms/booths. In it is a TV/monitor, an electronic jukebox that contains THOUSANDS of songs in several languages (Japanese, English, Chinese, Korean) and from all decades. We sung mostly English songs. Titles included Chuck Berry’s “Johnny B. Goode,” Bobby Pickett’s “Monster Mash,” The Monkees’ “Daydream Believer,” Rick Astley’s “Never Gonna Give You Up,” Nirvana’s “Smells Like Teen Spirit,” and many more.

Another nice feature: each room has a phone. Pick up the phone and you connect to the front desk. Tell them you want a drink and you’ll have it sent up to your room in just a minute with a charge added to your tab.

The flight back had some turbulence.  Probably the worst I’ve ever had, but it wasn’t too bad. Watched the following movies: Hancock, Mama Mia! (well, about half.  It kept freezing halfway through), and Singin’ in the Rain. The rest of the trip I slept.