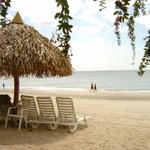 So I have returned from Panama.  I left March 4 and returned March 8.  A short trip that I wish could’ve been made longer, but work wouldn’t let me take off more time. By the way, click the image here, or this link, to view pics from Panama.

The purpose of the trip was to see my dad and stepmom. I, of course, did other things… like drink! Alcohol down there is cheap. I saw handles of vodka and rum in the grocery stores for about $12.50.

The parents live in a nice villa that’s part of a resort/hotel complex.  The villa they own is about 5 minutes away from the beach by golf cart. While on the beach–as seen in the picture–you can order drinks to be brought to you while you wait on a chair in the shade.

So I arrived late afternoon and received a quick drive through downtown Panama City and came to the conclusion that I never want to drive in that city.  Turnabouts and crazy pedestrians hinder any desire I may have had.  I mean, people walk across the highways, tollways, neighborhood roads, whatever, without regard for the traffic. But after getting two hours out of the city and into my parents’ area, the country is nice.

Thursday morning we went to a nearby town called El Valle, which is in the middle of an extinct volcano.  Nice little town.  We did a little bit of walking around, then we went to the zoo.  The zoo that had some strange breed of chicken.  But as we walked through the zoo, we found better things there, like the parrots, tapirs, raccoons and several other things (pics in the gallery linked above).  There were also monkeys, one of which we fed an orange that we found on the ground.  I sure hope spider monkeys aren’t allergic to oranges. *whistles innocently* This monkey named Laura looked to have a penis.  So if it really was a monkey with a gender identity crisis, perhaps we did it a favor by possibly killing it with an orange.

Friday we headed back to the city for a day of adventuring. We stopped by my parents’ friend’s office, then went to a nearby mall to do little household shopping,  then we visited the parents’ friend’s boat, a 47-foot yacht.  Then we returned home and chilled on the beach for a bit.

Saturday we chilled on the beach, then headed out to Penoname, a nearby town.  I picked up a t-shirt and belt for $9.  Nice!

And the trip ended well with me getting through customs and immigration here in Houston in about 15 minutes.  It was quite nice.  I wish I could make a trip back and stay for around two months.  I think I could become proficient in Spanish, as I recalled a LOT of what I had learned 10 years ago, while I was there.

Various other things: EVERYTHING on Cartoon Network is dubbed in Spanish or has subtitles, which could make learn Spanish fun; MTV down there actually plays music videos!!!;  the hot women are either in the grocery stores, airports or the mall; every bank I saw had a security officer (gun in holster) at the entrance; one grocery store had a guard with a rifle out front.